Australia’s mining and energy exports are expected to have hit a record-high of more than $400 billion as the fallout from Russia’s invasion of Ukraine deepens global shortages of coal and natural gas and sends commodity prices soaring.

Federal government trade data to be released on Monday reveals a 26 per cent increase in export earnings in the past financial year, from $320 billion in 2020-21 to an estimated $405 billion. 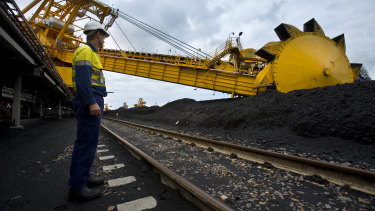 Prices for Australian coal have surged as the war in Ukraine worsens a global shortage of the fossil fuel.Credit:Louie Douvis

While countries around the world are scrambling to secure non-Russian sources of fossil fuels in a bid to starve Moscow of revenue it needs to finance the war in Ukraine, Federal Resources Minister Madeleine King said record-high export earnings underscored Australia’s role as a “stable and reliable” global supplier.

“Australia’s resources and energy sector continues to underpin Australia’s economy and to support international energy security during the global turbulence caused largely by Russia’s invasion of Ukraine,” she said. “The Australian government is committed to ensuring that the benefits of Australia’s exports flow through to all Australians, as well as the 303,000 Australians who work directly in the resources sector.”

Earnings from coal and liquefied natural gas (LNG) – the nation’s second and third-largest exports – have both more than doubled in the past 12 months, the trade figures reveal. After global energy markets collapsed due to pandemic lockdowns pummelling demand, benchmark prices for Australian LNG cargoes in Asia have since sharply rebounded from as low as $US2 per million British thermal units to an average of $US28.38 in the past financial year, driving Australia LNG export revenue to an estimated $70 billion.

Australia’s exports of thermal coal – the type of coal that’s burned for power generation – is expected to have jumped from $16 billion to $39 billion across the year on the back of historically high prices, while metallurgical coal used by the steel-making industry has risen from $23 billion to $60 billion.

The longer-term outlook for coal, however, remains deeply uncertain and will depend largely on how aggressively countries seek to decarbonise their economies by shifting to cleaner sources of energy. Large mining groups including Australia’s BHP have been increasingly divesting coal assets, while a growing number of banks, insurers and institutional investors are pledging not to make new investments in the sector, citing concerns about the fossil fuel’s contribution to global warming.

Iron ore, the key steel-making raw material, remains by far Australia’s most valuable export. The new trade figures estimate iron ore’s export earnings reached $133 billion for the year on the back of prices averaging between $US110 and $140 a tonne, but warns earnings would decline in the coming two years as mines in Brazil lift production volumes and global demand starts to slow.

“The value of iron ore exports is expected to moderate further in 2023-24, as prices ease toward their historical average below US$100 a tonne,” King said.

While the soaring fossil fuel prices are set to drive windfall profits for some of Australia’s largest oil, gas and coal producers, they have begun causing significant disruptions in Australia’s domestic energy markets and economic pain for households and businesses.

Surging oil prices have pushed unleaded petrol above $2 a litre, while coal and gas prices are driving up the cost of running Australia’s biggest power stations and forced electricity bills to increase.

Major manufacturing businesses, which depend on gas for energy or as a raw material, have joined trade unions in calling for the Albanese government to shore up gas supplies by pulling the trigger on a policy that would restrict a certain volume of gas from being exported and must be sold domestically.

The estimated $405 billion from mining and energy exports for the financial year is lower than an official forecast in March, which had suggested $425 billion.

King said the revision was due to recent flooding and other weather disruptions affecting Australian mining operations, ongoing COVID-19 workforce absenteeism and the impact of ongoing pandemic shutdowns curtailing demand in China.