Steve McCann hit the jackpot when he signed up to rehabilitate the strife-ridden Crown Resorts. In little more than a year, McCann played his way to a historically personally profitable resume stuffer. He will walk away from the chief executive job with around $9 million. 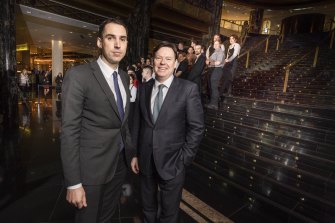 McCann knew when he took the job that his future at Crown was far from secure. The company was already the subject of corporate takeover interest from at least two parties.

He negotiated a remuneration package that included what amounted to career danger money – a $5.2 million in sign-on performance rights – for which he would become eligible in the event of a change of control. The marvellous part of the deal McCann negotiated is that he would also receive the performance rights even if he remained at Crown.

Crown was a most sought after regulatory basket case – but it was also the ultimate corporate fixer-upper.

History demonstrates that private equity players prefer to install their own management after they acquire companies – a fact of which McCann would have been acutely aware.

And Blackstone was true to form with Crown. It will insert Ciarán Carruthers – a casino lifer who has worked in numerous jurisdictions but most recently ran Wynn’s operations in Macau.

That said, McCann would have held more cards than most chief executives in his position.

The executive changeover needed will take place over a time of extreme regulatory oversight under the watchful eye of a special manager, a former public sector corruption watchdog Stephen O’Bryan to oversee the process of reform.

In Sydney, there will also be strict regulatory surveillance as Crown operates under a two-year provisional licence.

McCann had built a relationship with regulators having navigated Crown through the treacherous waters after it was found unsuitable to hold a casino licence by each of the three state based regulators in NSW, Victoria and Western Australia.

A public removal of McCann would have raised eyebrows.

That said Crown is certainly characterising the executive change as a mutual decision – one that replaces an executive experienced in deal making plus culture and organisation change with a seasoned casino operator.

Thus, it’s a transition that makes sense for everyone concerned – a win-win.

Having ticked plenty of boxes at Crown, McCann can now look to the future with a career rap sheet, including the success at running Lendlease, that would put him in pole position for another chief executive gig.

He has certainly earned his stripes as a consummate deal- doer managing to achieve top dollar from Blackstone for Crown shareholders and in particular its largest one, James Packer, who is now sitting on a $3.3 billion cash pile.

Behind the veil of private ownership it will be difficult to know how much value Blackstone and Carruthers can extract from the Crown franchises.

There is an expectation that in the medium term Blackstone will pursue the separation of Crown into a property company and a management company as a plank in the profit generating exercise.

Insiders have suggested there is value and cost-cutting to be found in the better use of technology within the gaming group.

But in the short term, the new team of chairman Bill McBeath and Carruthers will be confronted with the ongoing clean-up task.

They will also need to deal with the uncertainty around when or whether the Chinese mass market and VIP players will return.