It’s a bit hard to have a run on a bank when the depositors can’t get access to their funds, are assaulted by what appear to be plainclothes police when they protest, and China’s strict COVID regulations and the technology that supports them are used to flag protestors as health risks, which prevents them from using public transport or entering buildings.

The protest and assaults occurred at the weekend when an estimated 1000 depositors in rural banks in central China’s Henan province tried to protest a freezing of their funds that dates back to April. During an earlier protest last month protestors found that the health codes on their phones had turned red, which designates them as health risks and limits their mobility. 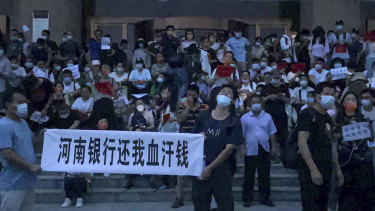 Demonstrators outside the People’s Bank of China in Zhengzhou, Henan province.Credit:AP

Initially depositors in the Henan banks were told they couldn’t access their funds because the banks were upgrading their systems, but it subsequently emerged that China’s authorities had started an investigation of allegations that a private investment company that had stakes in four small banks had colluded with bank employees to solicit funds via online finance platforms, which is illegal in China. Police in the province arrested a number of people associated with the private investment group, Henan Xincaifu Investment Group Holding Co.

Whether or not there was some sort of fraud involved in the Henan banks, the heavy-handed response of the authorities to the threat of a run on the banks and to the protests suggests something with wider significance. There have been reports of protests in other provinces.

Provincial banks historically marketed themselves to prospective depositors outside their regions using the big Chinese online platforms, but were banned from using third parties last year during the crackdown on the big tech companies, with the authorities citing potential financial risks. Since the ban, some smaller banks have created their own online marketing channels.

There is concern that the banks have attracted deposits by offering interest rates that are unsustainable in the current Chinese economic environment, with growth slowing quite dramatically because of the continuing lockdowns that result from China’s harsh “zero COVID” policy as well as soaring energy costs, droughts and floods.

Scenes like those at the weekend raise the risk of contagion within China’s banking system as depositors at other banks worry about losing access to their life savings.

When China’s second-quarter GDP data is released later this week, it is expected to have a “1” in front of it, which would have been unthinkable in pre-pandemic times.

In this environment, the potential for bank failures and bank runs, particularly among the smaller and less well-supervised banks, is real.

Scenes like those at the weekend – videos of the protests and the police response were circulated widely, and internationally, on social media – raise the risk of contagion within China’s banking system as depositors at other banks worry about losing access to their life savings.

Whether or not there is fraud involved in Henan, or if it is more a matter of the banks not being able to generate sufficient income to service the interest rates they offered to attract the deposits, it isn’t all that surprising that there are some stresses emerging within China’s banking system.

The implosion of the country’s property sector (after a heavy-handed crackdown on leverage) has generated a string of major property developer defaults on their debts. It has also damaged local governments heavily reliant on income from property sales to developers as the developers’ sales to home buyers have more than halved over the past year, and had a wider impact on a Chinese economy where more than 30 per cent of GDP is exposed to the property sector.

Despite central government attempts to prop up the sector with rate cuts, relaxation of lending restrictions, incentives to take out mortgages and voucher programs for future home purchases, mortgage lending in the first quarter of this year was at its lowest level on record.

So dire is the plight of developers that some of them in rural China are now offering to accept garlic, wheat, barley and even watermelons as payment for deposits.

And the dominoes keep falling at the big end of the property sector. Last month, ratings agency Moody’s said it had downgraded 91 developers over the past nine months. In the decade to December 2020, it had only downgraded 56.

Analysts have estimated there have been 30 defaults by companies with more than $US1 trillion ($1.5 trillion) in debt since Beijing introduced its “three red lines” policy restricting developers’ leverage in late 2020.

Last week, Shimao Group defaulted on a $US1 billion bond and this week China Evergrande, which defaulted on its offshore bonds late last year, moved closer to a default on its domestic debt after creditors refused to extend a deadline for repayment of their debts.

A domestic default by Evergrande would have major ripple effects through the sector. Until now, it has been primarily foreign creditors and owners of uncompleted apartments bearing the brunt of the property sector’s losses.

There’s also another $US13 billion or so of foreign currency bond payments due before the end of this year, which could drive another wave of defaults.

China’s authorities are clearly concerned because they are creating a bailout fund with capital provided by the major financial institutions as a contingency against potential collapses of banks or insurers. 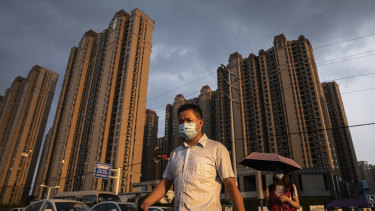 A domestic default by Evergrande would have major ripple effects through China’s property sector.Credit:Getty Images

They would have an eye not just on the stresses within China’s domestic financial system but the increased volatility within international markets and the divergence between China’s monetary policies and those of the US and Europe, which are tightening their policies even as China is loosening its monetary settings.

While the official data is yet to show any signs of a blow-out in non-performing loans within China’s banking system, that data is viewed with some cynicism by analysts outside China. It is almost inconceivable that the turmoil within the property sector hasn’t had a material impact on bank balance sheets.

The COVID lockdowns (there’s been another outbreak in Shanghai), the general slowdown in China’s economy, an exodus of foreign capital as interest rates in the US rise, and fear of being caught up in the West’s sanctions on those doing business (as China is doing) with Russia won’t help.

According to Bloomberg, Beijing’s Ministry of Finance is considering allowing local governments to sell the equivalent of $US220 billion of special bonds in the second half of this year, which would presage an attempt to generate growth through another big burst of infrastructure spending.

That’s another sign that the authorities are concerned about the trajectory of the economy and the vulnerability that its weakness might expose even as Xi Jinping readies himself for the Communist Party’s endorsement of an unprecedented third term as the party’s chairman later this year.