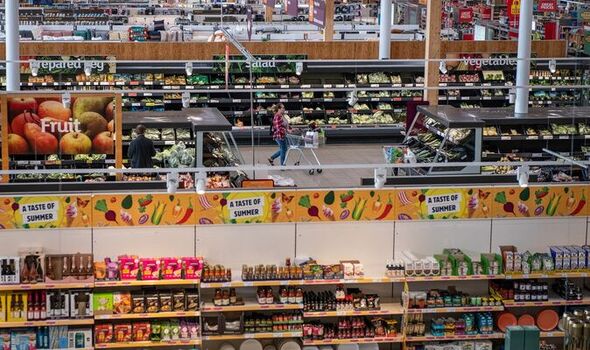 Grocery price inflation leapt to 9.9 percent over the four weeks to July 10, research firm Kantar has revealed. This is a sharp rise from the 8.3 percent in the previous month – with the fastest increases affecting dog food, butter and milk.

Supply chain issues and labour pressures have added to costs in food production, which are now being fed back to shoppers.

The Office for National Statistics will today reveal what happened to inflation last month with the Consumer Prices Index inflation widely expected to have risen again from May’s 9.1 percent, already a 40-year high.

A bigger interest rate rise could be on the table at the next meeting of the Bank of England’s decision makers early in August.

Governor Andrew Bailey said last night that a 50 basis point rise – from 1.25 percent to 1.75 percent would be one of the options for the Monetary Policy Committee.

Fraser McKevitt, head of retail and consumer insight at Kantar, expects the overall record for grocery inflation to be surpassed next month.

He added: “All this means that people will be feeling the pinch during our first restriction-free summer since 2019.

“Taking a barbecue as an example, buying burgers,
halloumi and coleslaw for some al fresco dining would cost you 13 percent, 17 percent and 14 percent more than this time last year.”

Oils, sauces and spreads are among the products that have been affected by the rocketing energy costs amid the invasion of Ukraine.

Supermarkets have also seen a 14 percent jump in ice cream sales and a 66 percent lift for sun-care products over the month as Britain endures searing heat.

It is thought millions of families are cutting back on their red meat and fish intake in particular as the rising costs hit household budgets.

Glesni Phillips, a data analyst for Meat Promotion Wales, said: “In previous periods where there has been a squeeze on living standards, there can be shifts in demand for different proteins.

“All proteins are experiencing increases in their average prices but fish remains the most expensive protein followed by lamb.

“Despite one of the biggest price rises, chicken remains the cheapest protein.

“Product choice is the main way shoppers are choosing to manage inflation.” Rebecca Veale from the National Pig Association, insisted a “fair price” needs to be paid to producers for British pork to remain on shop shelves.

Sue Davies, head of food policy and consumer rights at Which?, said: “With soaring costs already causing difficulty for millions of households, these latest figures are deeply concerning.

“Even before more recent price rises, our research found the price of hundreds of everyday groceries had surged by more than 20 percent over the last two years and that own-brand budget groceries have become less available.

“Supermarkets must do what they can to reduce the stress of budgeting by providing clear unit pricing to help shoppers to compare items and find the best value option.

“Budget ranges also need to be more widely available across stores so consumers are not forced to pay over the odds for essentials.”