The 24-hour period following any change in the Reserve Bank’s cash rate is a fascinating window into the behaviour of economists (as opposed to behavioral economics) and the conduct of the four large banks who desperately loathe being the first to pass the rate rise onto customers.

Interpreting Reserve Bank cash rate statements is something of a cottage industry – it is an even bigger industry in the US where translating commentary from the Federal Reserve has been elevated to an art form.

The prominence of the introductory and closing paragraphs matters in RBA statements, the addition of even a word that can harden a point matters, while a new adjective can signal a change in focus.

And the overall vibe needs to be translated to provide economists with a feel as to the likelihood of timing and magnitude of future RBA rate decisions.

Not surprisingly, there is no hard consensus among economists around a statement that requires such a degree of interpretation.

To the extent there are common elements in translation of Tuesday’s rate statement, it would be that the RBA has opened the door to easing off on its relentless raising of rates if the data suggests that the four consecutive rises completed are having the desired effect of closing consumer wallets.

The market is still punting that September will bring another half percentage point rate increase and many think this will be repeated in November.

This will be followed by an RBA breather (some believe), while others think December will bring a smaller 25 basis point rise before the RBA takes a break.

The central bank has made one point beyond debate – its three top priorities are inflation, inflation and inflation.

How the big four banks respond to the RBA is even more curious – a curious dance and an exercise in game theory. 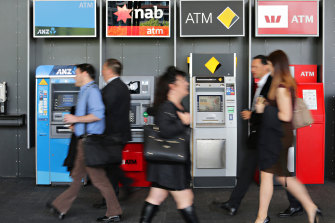 Hiding behind another bank works best when it comes to rate rises.Credit:Paul Rovere

It’s a competition about who goes first. Hiding behind another bank works best.

It feels bizarre given borrowers are aware that all the banks will pass on the RBA’s rate rise in full. The banks fully understand the RBA has given them the cover to allow them to raise rates by half a percentage point.

By 3.30pm on Wednesday – more than 24 hours after the RBA statement – none of the four major banks had said a word. (Macquarie had moved the previous evening on savings and borrowing rates.)

Privately, ANZ, Westpac and NAB have spent the day pointing the finger at the Commonwealth Bank, hoping that, as the largest player, it would take the lead.

One bank assured me that being first to move left that bank exposed because customer focus groups found that branding was damaged for the first mover in raising rates.

Frequently the first mover is left out to dry for hours before the rest follow suit.

This kind of bank gamesmanship was understandable in years gone by when the RBA was lowering rates and the banks were not passing the full cut onto borrowers.

In this instance, it was important to see what the other banks were doing.

This time around with all passing on the full rate rise, the difference between the banks will come down to how they treat depositors.

It is a market that is now being carefully watched by customers and by the treasurer, Jim Chalmers.

He has already launched a shot across the bow of the big banks that have captured hundreds of millions in profits by arbitraging higher lending rates and not fully passing it to depositors.

How the banks respond to savers is particularly important because there is an additional $260 billion parked in bank accounts than there was before COVID-19 struck.

But transparency around savings rates is muddier. There are so many types of rates, depending on size, duration, honeymoon periods and caps applied, that it is difficult to compare apples and apples.

But it is a major competition battleground for the banks – and the real area to watch. Chalmers certainly is.