Economists and business people talk unceasingly about the crying need to improve the economy’s productivity, but most of what they say is self-serving and much of it’s just silly. Fortunately, this week’s five-yearly report on the subject from the Productivity Commission, The Key to Prosperity, is far from silly, and might just stand a chance of getting us somewhere.

It’s the first of several reports and, unlike the tosh we usually get, it’s not selling any magic answers. Business people mention productivity only when they’re “rent-seeking” – asking the government for changes that will make it easier to increase their profits without them trying any harder. 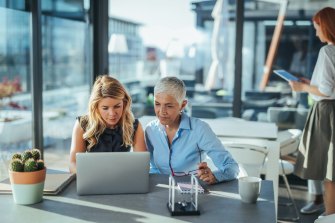 Over the past 60 years, our productivity improved at an average rate of 1.7 per cent a year. Over the decade to 2020, it “slowed significantly” to 1.1 per cent a year.Credit:Getty

Their favourite magic answer is to say that if only the government would cut the tax paid by companies and senior executives, this would do wonders for productivity.

As for the econocrats, too often they see it as a chance to advertise the product they’re selling: “microeconomic reform” – by which they usually mean reducing government intervention in markets.

A lot of people think wanting higher “productivity” is just a flash way of saying you want production to increase. Wrong. The report makes it clear that improving productivity means producing more outputs, but with the same or fewer inputs.

It sounds like some sort of miracle, and it is pretty amazing to think about, but it happens all the time.

Another mistake is to think that wanting to increase productivity is the bosses’ way of saying they’re going to make us work harder. No, no, no. As the report repeats, productivity comes from working smarter, not harder or longer.

In response to the scientist-types who keep repeating that unending economic growth is physically impossible, and then wondering what bit of this the economist-types don’t get, the report says that “while economic growth based solely on [increased] physical inputs cannot go on forever, human ingenuity is inexhaustible”.

Get it? Economic growth doesn’t come primarily from cutting down trees and digging stuff out of the ground – and the scientists are right in telling us we must do less despoiling of the environment, our “natural capital” – it comes overwhelmingly from using human ingenuity to think of ways to produce more with less.

That’s why the report says improved productivity is “the key to prosperity” and is based on “the spread of new, useful ideas”. 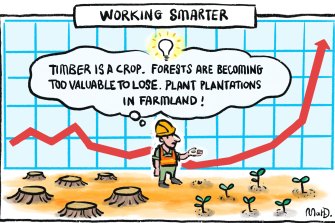 This gives us a mixture of novel products, improved quality and reduced cost.

Over the past 200 years, since the start of the Industrial Revolution, the productivity of all the developed economies has improved by a few per cent almost every year. In our case, over the past 120 years the economic output of the average Australian is up seven-fold, while hours worked has consistently fallen.

It’s pretty clear that, if we’re going to get back to higher rates of productivity improvement, we’ll have come up with some new ideas on how to make the service industries more productive, without diminishing quality.

The report is quick to point out that much the same has been happening in all the rich countries. (It does note, however, that the level of our productivity is now lower than it was compared with the levels the other rich countries have achieved.)

This is significant. It suggests that whatever factors have caused our productivity performance to fall off are probably the same as those in the other rich economies. But as yet, none of them has put their finger on the main causes of the problem.

If they’re still working on the answers, so are we. So the report focuses on thinking about what may be causing the problem and where we should be looking for answers. Remember, this is just first of several reports.

So, unlike the rent-seekers and econocrats, it’s offering no magic answers. But it does come up with a good explanation for at least part of the productivity slowdown: for most of the past two centuries, one of the main ways we’ve produced more with less is by using newly invented “labour-saving equipment” to replace workers with machines in farming, mining and then manufacturing.

The quantity of goods we produce in those industries has never been greater, but the number of people employed to produce it all is a fraction of what it once was. And this accounts for a huge proportion of the productivity improvement we’ve achieved since Federation.

Because producing more with less makes us richer, not poorer – increases our real income – total employment has gone up rather than down as we’ve spent that extra income employing more people to perform all manner of services – from menial to hugely skilled.

So successful have we (and all the rich economies) been at shifting workers from making goods to delivering services that the service industries now account for about 80 per cent of all we produce and about 90 per cent of all employment.

See the problem? In the main, services are delivered by people. So the economy’s now almost completely composed of industries where it’s much harder to improve productivity simply by using machines to replace workers. It’s far from impossible, but it’s much harder than on a farm, mine site or factory.

That’s the more so when you remember that two of the biggest service industries are health and social assistance, and education and training.

It’s pretty clear that, if we’re going to get back to higher rates of productivity improvement, we’ll have come up with some new ideas on how to make the service industries more productive, without diminishing quality. That’s what comes next in the Productivity Commission’s series of reports.