New York (CNN Business)It’s May the 4th, a day for Star Wars nerds to geek out on Luke Skywalker, lightsabers and the Millennium Falcon. So why are so many sci fi fans talking about Spock, phasers and the USS Enterprise?

Even though May 4th is known as “Star Wars Day” (as in, “May the 4th be with you,”) Star Trek is trying to one-up its rival space franchise with a big week of its own.
Paramount is set to debut the highly anticipated “Star Trek: Strange New Worlds” on Thursday for its streaming service, Paramount+. The series — which stars Anson Mount as Captain Christopher Pike and Ethan Peck as Spock — is a spin-off of the streamer’s popular “Star Trek: Discovery” series and a prequel to the original “Star Trek.”

If that wasn’t enough to send fans into warp speed, the season two finale of “Star Trek: Picard” — one of the streamer’s biggest hits, starring Patrick Stewart as Jean-Luc Picard — also airs on Paramount+ Thursday.

Star Wars is the more popular and far more lucrative brand (search your feelings, Trekkies, you know it to be true). Yet, Star Trek is the more vital franchise to its parent company.

Although the Disney+ subscriber numbers have been boosted by “The Mandalorian” and Baby Yoda, the platform also has Marvel, Disney Animation and Pixar content to entice and retain viewers. Paramount+ is no slouch, thanks to Nickelodeon, Paramount Pictures and CBS. But Star Trek is the signature franchise for the streaming service.

Star Trek — which launched as a TV series in 1966 — has boldly gone where many brands have gone before: into the world of film, books and streaming. But not many brands have the same loyal following that Trekkies provide.
Paramount+ wants to give that fandom, as well as potential new consumers, as much Star Trek content as it can. A constant stream of new Star Trek fare, from “Strange New Worlds” to “Lower Decks” to “Discovery” and “Picard,” gets fans to sign up and stay on the service. It also helps Paramount+ stand out among the litany of streaming options.
Paramount+ isn’t stopping anytime soon. It recently became the exclusive home of the vast majority of Star Trek franchises, which had previously been available on Netflix (NFLX) and Amazon (AMZN) Prime Video among other services. 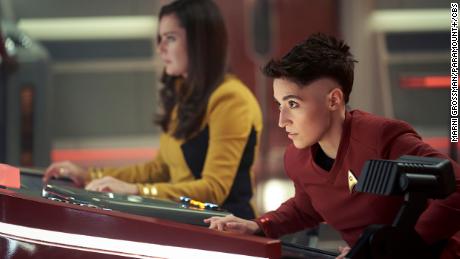 That means fans can rewatch “Star Trek: The Animated Series,” “Star Trek: The Next Generation,” “Deep Space Nine,” “Voyager,” “Enterprise” and all the movies on Paramount+. The streaming service also includes the anthology series “Star Trek: Short Treks,” and the kid-friendly “Star Trek: Prodigy.”
And there’s more to come: Paramount announced earlier this year that a new Star Trek film would be hitting theaters in 2023 — news so shocking that it even surprised the stars of the film. And this week, Paramount said it was working on a “Discovery” spinoff starring Michelle Yeoh called “Section 31,” as well as a series about the Starfleet Academy.
Simply put, if you’re a true Star Trek fan, you need to pony up for Paramount+.

With all of this excitement over Star Trek, Star Wars must be feeling a bit left out on its special day, right?
Well, not exactly.
Disney (DIS) and Lucasfilm released the new trailer to “Obi-Wan Kenobi” — the latest Star Wars series for Disney+ on Wednesday. The series, which premieres May 27, brings back Ewan McGregor as the Jedi master and has him face off against his former apprentice, Darth Vader.

The trailer lit up social media for its brief glimpse of the return of Vader, stirring excitement for the latest chapter in the space saga.
So even though Star Trek looks likely to live long and prosper on Paramount+, it didn’t win the day. And as we all know, the force that is Star Wars will be with us … always.
Source: Read Full Article