While it awaits the 2024 arrival of Pac-12 carpetbaggers UCLA and USC, the Big Ten Conference has inked new distribution deals with CBS, Fox, NBC and Peacock. The pacts, which include current partners FS1 and Big Ten Network but drops ESPN/ABC, are the most lucrative in college sports history — valued at nearly $8 billion.

Covering football, women’s and men’s basketball and more, the deals are worth more than $1 billion a year for seven years, kicking in starting July 2023 and running through the 2029-30 season. They will replace current ones estimated to be worth $2.6 billion over six years. 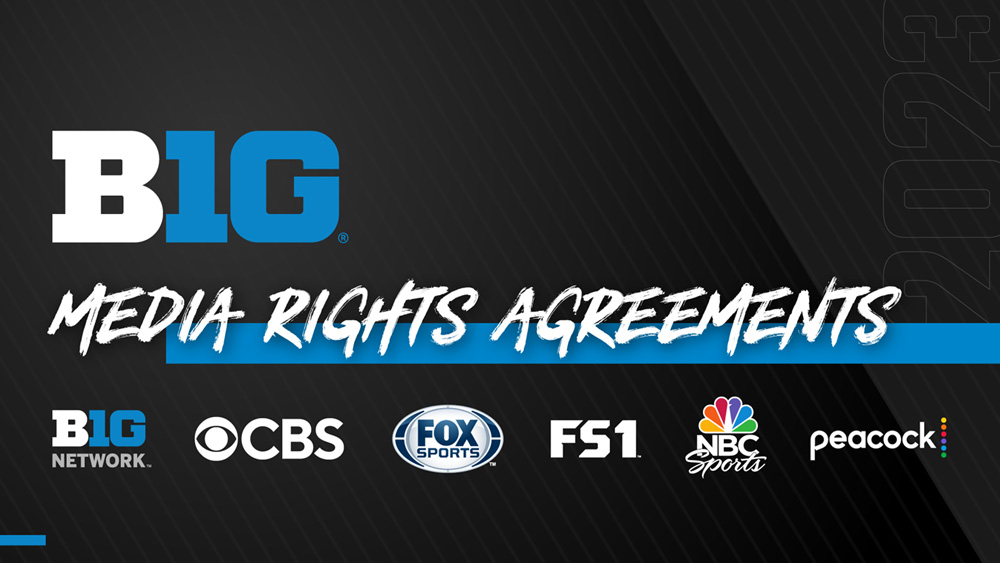 ESPN and ABC, which previously had shared rights to the Big Ten with Fox, bowed out of the renewal and are not in business with the conference for the first time since the 1980s. The Disney-owned networks are more focused on the football-rich SEC and other college conferences.

The deals come after a significant reshuffling in the college conference ranks as schools and networks look to capitalize on surging TV ratings, especially for football.

“The Big Ten Conference media rights agreements are more than just dollars and deals,” Big Ten Conference Commissioner Kevin Warren said. “They are a mechanism to provide stability and maximum exposure for our student-athletes, member institutions and partners during these uncertain times in collegiate athletics.”

Here are some specifics of the deals revealed today:

Big Ten Network will maintain its strong position as the home for Big Ten fans, as the network will continue to televise a full slate of football, basketball and Olympic sport competition throughout the entire year.

CBS’ initial season in 2023 will include seven football games and both regular season and postseason men’s basketball action, along with the Big Ten Women’s Basketball Tournament final appearing on CBS for the first time. The Big Ten Men’s Basketball Tournament semifinals and final will continue the tradition of airing on CBS, which they have done for 25 years. Every CBS Big Ten football and basketball broadcast will also be streamed on Paramount+, Paramount Global’s direct-to-consumer streaming service.

Starting in 2024, CBS will televise up to 15 regular-season football games per season, including an annual Black Friday game in the afternoon. CBS is America’s most-watched network for the past 14 years and the highest-rated college football network.

Fox has renewed its agreement to televise football and men’s basketball games each season, with the opportunity to carry additional sports throughout the year. The Big Ten Conference’s partnership with Fox reached its high point during the 2021-22 year, as FOX captured the #1 time slot in college football for the first time with its Big Noon Saturday platform that featured 10-14 games involving a Big Ten team, and a men’s basketball season that ended with the top three most watched games in the history of FS1 all featuring Big Ten programs.

NBC will produce 14-16 games on broadcast television each season as it introduces college football fans to Big Ten Saturday Night. Each Big Ten game on NBC broadcast will also be simul-streamed on Peacock, NBCUniversal’s direct-to-consumer streaming service. NBC Sports has established the most dominant primetime franchise in television history, as its Sunday Night Football has been primetime’s No. 1 show for an unprecedented 11 consecutive years – a streak that is currently active.