Some of Australia’s largest superannuation funds are being urged to review their partnerships with an investment manager facing a backlash for sponsoring a Republican-aligned, climate-change sceptic foundation in the US.

Several super funds have already shared their concerns with Federated Hermes, a $669 billion global investment manager that markets itself as a pioneer of responsible investing but has recently been revealed to be a “gold sponsor” of the State Financial Officers Foundation. 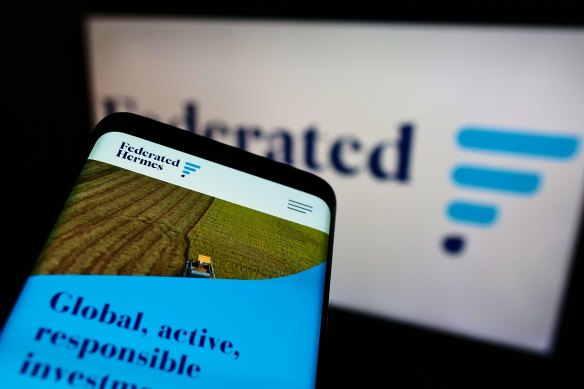 Federated Hermes, a $669 billion global investment manager that markets itself as a pioneer of responsible investing but has recently been revealed to be a “gold sponsor” of the State Financial Officers Foundation.Credit:Alamy

The foundation is a non-profit organisation, supported by a large number of Republican state treasurers and auditors, which opposes action on climate change. It has been strongly campaigning against environmental, social and governance (ESG) investing, describing it as a “scam” likely to damage the US economy.

Federated Hermes’ sponsorship of the foundation has been questioned by some of its Danish pension fund clients, and now several Australian super funds want an explanation.

The stewardship team at Federated Hermes, known as EOS, oversees $320.5 billion in assets under advice in Australia through partnerships with superannuation firms, mainly by providing proxy advisory services and engaging with global companies on the funds’ behalf to ensure best practice when it comes to ESG investing.

Hostplus, Colonial First State, CBus, HESTA and Aware Super have partnerships with the company, as does the influential Australian Council of Superannuation Investors, which uses EOS at Federated Hermes to help local investors assess ESG risks in international companies.

“We have expressed our strong concerns to EOS at Federated Hermes. We are awaiting more detail on the issues, and EOS’s response,” she said.

“The positioning of the State Financial Officers Foundation is concerning and clearly runs contrary to the approach taken by Australian superannuation funds and asset managers on responsible investment.”

EOS at Federated Hermes also engages with global companies on behalf of $70 billion pension fund Cbus Super. A Cbus spokesman said they had been asking questions about the sponsorship.

“We immediately raised this issue with Federated Hermes EOS when alerted to it last week. Like our European counterparts, we continue to seek more detail. Future meetings have been placed on hold so those discussions can take place,” the spokesman said.

“ESG integration is essential for long-term retirement outcomes for Cbus members. Federated Hermes EOS is an effective and valuable partner in this work, which is why funds are disappointed in this out-of-character sponsorship.”

Aware Super, which manages $150 billion on behalf of more than a million members, said it partners with global service providers to engage with companies on issues around climate change and ESG, and had a long-standing relationship with Federated Hermes.

“We do have concerns about the reported sponsorship by Federated Hermes in support of the US-based State Financial Officers Foundation, and accordingly we’re currently in talks to better understand the nature of that relationship,” said a spokesman.

The $68 billion health and community services union HESTA, which partners with Federated Hermes to vote on shares and undertake company engagement on their behalf, declined to comment, as did Hostplus. Colonial First State said it had “constructive discussions with all of our suppliers, including EOS at Federated Hermes, and [engages] with them regularly on any issues that may arise.”

Federated Hermes declined to comment beyond a statement released several weeks ago on its website, in which it says it participates with a variety of global organisations, including the State Financial Officers Foundation, and listening to different viewpoints was critical to their engagement process.

“We do not set the agendas for these organisations; rather, they operate according to their unique charters and the views of their members and elected leadership. Our participation does not serve as an endorsement of any organisation’s particular perspective on any issue,” they said.

“We work with a range of clients who hold different views on ESG. Some embrace ESG integration and others do not. We engage with all, listening to their views and putting forward our capabilities to meet needs consistent with their convictions.”

A New York Times investigation this month found that the State Financial Officers Foundation was at the centre of a push from Republican politicians to thwart climate action, in part by using the tax dollars they control to punish companies that promise to reduce greenhouse gas emissions. 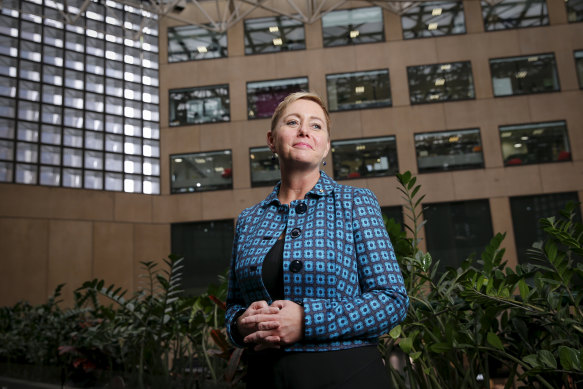 Last week, Texas comptroller Glenn Hegar – a financial officer at the foundation – released a list of financial firms that the state alleges are boycotting fossil fuel companies, which included the world’s largest asset manager BlackRock. Under anti-ESG laws introduced last year, those companies will now face obstacles or a ban on doing business with state entities.

The State Financial Officers Foundation has also lobbied against proposals by US regulators to create new climate risk disclosure standards for companies, declaring the proposal “indulges in irrational climate exceptionalism, elevating climate issues to a place of prominence in disclosures that they do not deserve”.

“Not all Americans agree … that the climate is about to inflict increasingly severe losses on issuers and to force changes to their business operations.”

Derek Kreifels, the foundation’s chief executive, said in a statement that they did not discuss information about their donors and sponsors.

“State financial officers in the United States have an obligation to do what is in the best interest of their state and its people,” he said. “That means pushing back against political activists who are using ESG to drive their agenda through economic coercion, especially when they are unable to do so through democratic processes.”

Brynn O’Brien, the executive director of the Australian Centre for Corporate Responsibility, said it was important that Australian climate-aware funds and institutions look at the relationships they have with their advisers and the political influence of their value chain.

“One of the main things holding us back to accelerating decarbonisation globally and in Australia is the political influence wielded by those who stand to benefit from delay,” she said.

“Eliminating that negative political influence from your value chain and suppliers, or at least being alive to it, is absolutely in the interests of all of those who stand to benefit from acceleration.

Simon O’Connor, the head of the Responsible Investment Association Australasia, said it wasn’t surprising that super funds that have partnerships with Federated Hermes were asking for an explanation.

“I think it’s absolutely appropriate that they should be asked to respond to why they have a relationship of that particular nature and how that is consistent with the strong position they present in the responsible investment field,” he said.

O’Connor said it would be interesting to see how Federated Hermes responded.

“Being a sponsor is being different to being an owner of a company. But quite clearly questions have been raised as to whether this is consistent with the role EOS Federated Hermes is playing in terms of supporting investors of pension funds to transition to a net-zero future.”

“I think it’s really important that we set the same standards to apply to our own activities as an industry. So it’s right that we’re asking questions. And it’s right that there’s a response expected from the fund manager. It will be interesting to see how this unfolds.”

Federated Investors acquired a majority stake in ESG investing pioneer Hermes Fund Managers Limited in 2018, before changing its name to Federated Hermes in February 2020. It released an updated corporate identity focused on a commitment to responsible investing.

In 2021, Federated Hermes declared it wanted to crack the Australian superannuation market by utilising its responsible investing credentials, saying the ESG market in Australia was second only to the EU.