New York (CNN Business)It’s not just about the money.

There has been a surge in union activism — including strikes and organizing efforts — in the last year that is being driven by factors far beyond pay rates and benefits packages.
If pay was the only issue, the nation probably wouldn’t be facing the risk of its first national rail strike in 30 years this coming week, a walkout that could knock the legs out from under the still struggling supply chain and be another body blow to the US economy.

A presidential panel looking at that labor dispute recommended the two sides agree to a five-year contract that includes an immediate 14% raise, backpay from 2020, and a 24% pay increase over the course of the contract. That’s less than the 31% in raises over five years the union is seeking, but more than the 17% previously offered by railroad management.

That was enough to get some of the unions to agree to tentative deals, but not the unions that represent more than 90,000 workers, including those who make up the two-person crews on freight trains. They appear poised to strike unless Congress acts to keep them on the job.

Those unions say they’re not rejecting the wage offer. Rather, it’s the work rules, staffing and scheduling proposals they object to, which require them to be on call, and ready to report to work, seven days a week for much of the year. If it were just a question of wages, a deal between the two sides would likely already be in place.
“We’re not going to sit here and argue about [wages] or health care. We’re beyond that,” said Jeremy Ferguson, president of the union that represents conductors, one of the two workers on freight trains along with the engineer.

The unions say conditions on the job are driving thousands of workers to quit jobs that they previously would have kept for their entire careers, creating untenable conditions for the remaining workers. Changing those work rules, including the on-call requirement, is the main demand.
“The word has gotten out these are not attractive jobs the way they treat workers,” said Dennis Pierce, president of the union representing engineers. “Employees have said ‘I’ve had enough.'”

And it’s not just the railroad workers who have reached this breaking point.
More than 2,000 mental health professionals are on strike against Kaiser Permanente in California and Hawaii. The union members there say inadequate staffing is depriving patients of care and preventing them from doing their jobs effectively.
Alexis Petrakis, a member of the union’s bargaining committee and a child therapist at Kaiser for the last three years, said she had never been in a union before and didn’t expect to be going on strike this time. But she said the poor quality of care and the company’s inability to schedule visits for new patients for up to six weeks because of staffing issues, have pushed her and her co-workers to walk out.
“Being away from my patients is heartbreaking. But what I go back to is they were getting inadequate care,” Petrakis said. “The curtain is being lifted on this broken system. It needs to change now. I’m doing everything I can so their care moving forward is better.”
Teachers in Columbus, Ohio, went on strike at the start of the school year complaining about large class sizes and dilapidated schools where a lack of heating and air conditioning has created miserable classroom environments. The school district, the largest in Ohio, quickly settled.

The complaints about working conditions, safety, and quality of life issues aren’t just prompting strikes. They’re also driving a surge in organizing efforts.
The successful unionization effort at an Amazon distribution center in Staten Island, New York, started with concerns over worker safety in the early days of the pandemic. It was the first successful union vote at an Amazon (AMZN) facility.
Worker safety protocols and the desire to have a voice in the way stores are run are major reasons why baristas at more than 200 Starbucks nationwide have voted to join a union in the last nine months.
These noneconomic issues might seem unique to today, but they were behind the very foundation of the US labor movement a century ago.
Employees fighting for safer working conditions and quality-of-life issues such as weekends off, holidays, paid vacation and a 40-hour week helped unions establish a toehold in the US and led to their growth in the first half of the 20th century.
Union members aren’t the only ones voicing concerns about these issues. Some economists attribute the so-called “Great Resignation” that saw a record number workers quit their jobs starting in 2021, to employees’ greater focus on quality-of-life issues. And they say the pandemic brought these issues to light for many workers.
Beyond the impact that had on the broader labor force, concerns about work conditions has resulted in a surge of union activism.
There have been 263 strikes so far this year, according to a database kept by Cornell University, up 84% from the same period last year. 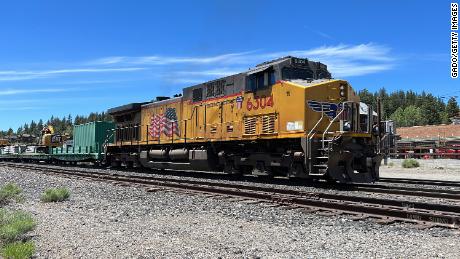 And there have been 826 union elections at workplaces from January through July of this year, up 45% from the number held in the same period of 2021, according to data from the National Labor Relations Board, which oversees the votes. The 70% success rate by unions in those votes is far better than the 42% in the first seven months of 2021.
Those surges in activity would never have happened without the non-economic issues coming front and center, according to union officials.
“That’s definitely what’s driving the voice of the workers around the country. It’s not just pocketbook issues,” said Fred Redmond, secretary-treasurer of the AFL-CIO. “They want their voices heard. They’re working horrendous schedules. Workers are finding out their bosses don’t respect their voice, they don’t respect them.”
Experts agree that the unions are finding newfound success because of worker anger about noneconomic issues.
“Unions are successful when they are building on things that workers are concerned about,” said Alexander Colvin, dean of the school of industrial and labor relations at Cornell University.
“The scheduling, the health and safety concerns, those are very important,” he added. “There’s certainly an opportunity for the unions there.”

And experts say these issues are a good sign for continued union strength going forward.
“The rising of importance of the noneconomic issues … suggests a rebirth of the labor movement,” said Todd Vachon, a professor of labor studies at Rutgers University. “Economic demand for labor will ebb and flow. The more encompassing the demands that labor brings to the table, the better they’ll be able to weather the changes in the economic business cycle.”
Source: Read Full Article