The latest increase in interest rates will likely intensify the already surging numbers of applications for credit card and personal loans, as more people struggle in the face of higher costs of living having run down their savings accumulated during COVID-19.

As the Reserve Bank of Australia (RBA) lifts interest rates for the seventh month in a row, to take the cash rate to 2.85 per cent – the highest it has been for nine years – figures from credit bureau Equifax show applications for credit cards grew 31.5 per cent in the three months to September, compared to the same period a year earlier. 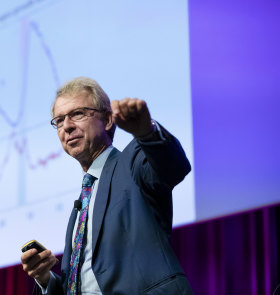 AMP Capital’s Shane Oliver says the cost-of-living squeeze is set to get worse, before it starts to ease next year.Credit:Dominic Lorrimer

Households accumulated savings during the worst of COVID-19 as the federal government extended financial assistance to those who lost their jobs or had reduced hours, banks granted repayment pauses to those with mortgages and discretionary spending was curtailed.

The household savings ratio – the proportion of the net disposable income of all households that are not consumed by households in the period measured – is back to just above pre-pandemic levels.

“As the cost of living increases and the impact of interest rate rises starts to hit home…the buffer of household savings [that] consumers accumulated over the past few years is starting to erode,” says Kevin James, the general manager of advisory and solutions at credit bureau Equifax.

“In light of this, some consumers may be turning to unsecured credit to help them bridge the gap,” he says.

The biggest increases in demand for credit cards and personal loans were in NSW, Victoria and the ACT, the states and territories with the highest house prices and biggest mortgages.

Many of those buyers who took out fixed-rate mortgages with very low rates of interest in 2020 and 2021 will “roll off” to much higher variable interest rates in the second half of 2023 as their fixed terms end.

It is not only variable rate mortgage holders who are facing higher minimum repayments, but also renters with asking rents rising 15 per cent, nationally, over the past year.

The NAB Wellbeing Index shows that the impact of rising costs is being felt by many. In a survey carried out in August and September, almost half of the respondents said higher prices were the biggest cause of stress in their lives.

Shane Oliver, the chief economist at AMP, says the cost of living squeeze will probably get a “lot worse” before it starts to get better, likely to be from the middle of next year.

“It looks like the rate rises are having an impact on spending,” he says. “Discretionary consumer spending is slowing, and retail sales growth is stalling in real terms,” Oliver says.

Inflation is running at an annualised rate of 7.3 per cent – the highest rate since 1990 – but is expected to fall next year, he says.

“As we go through next year, [annualised] wages growth will likely stay at about 3.5 per cent, but inflation will probably fall to about 4 per cent [annualised],” he says.

“People will still be losing purchasing power, but the deterioration will start to moderate.”