The owner of two of the country’s biggest bookmakers will no longer sponsor the jerseys of Australian professional teams amid a growing backlash against gambling advertising in sport.

Irish wagering giant Entain told The Sydney Morning Herald and The Age that its Ladbrokes and Neds brands would no longer appear on the shirts of sportspeople as part of a bigger reduction in the group’s sponsorship of sport. 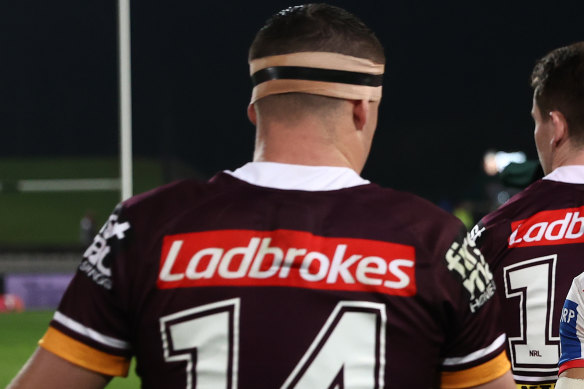 Entain, owner of Ladbrokes and Neds, will no longer sponsor the jerseys of professional teams as part of a bigger walk back of the group’s sponsorship of sport. Credit:Getty

“While we have had many great partners in this space over a long period of time, we understand some of the community sentiment around this and feel it is the right time to step away from this area.”

It’s understood the decision is the first part of a considered plan to wind back Entain’s sponsorship of sport in Australia.

Entain has sponsored a range of NRL and AFL teams in the past including the Brisbane Broncos, Western Bulldogs and the Brisbane Lions and has existing sponsorships with the UFC and A-League.

Neds is the official wagering partner of the A-Leagues and of UFC Australia. It also sponsors the Brisbane Lions despite no longer appearing on the team’s jersey.

Ladbrokes axed its $7.5 million sponsorship of the Brisbane Broncos in July after the Queensland government increased the point of consumption tax to include free and bonus bets and a new 5 per cent racing levy. The company had sponsored the back of the jersey since 2016.

Ladbrokes will continue its extensive partnerships in Australian racing.

An exclusive poll for The Sydney Morning Herald and The Age earlier this week revealed 62 per cent of voters would ban gambling companies from sponsoring professional sport.

The survey, conducted for this masthead by Resolve Strategic, revealed that only 25 per cent of respondents believed gambling and betting companies should be allowed to sponsor sport, while 62 per cent prefer a ban and 14 per cent are undecided.

The findings highlighted the growing debate over the money pouring into major sport from sectors fiercely opposed by critics, who say the result “normalises” industries that harm the environment or the community.

The government announced on Monday that online wagering companies will be required to ditch the phrase “gamble responsibly” by March next year in favour of new taglines that prompt gamblers to consider the consequences of losing a bet.

The new taglines include: “Chances are you’re about to lose”; “Think. Is this a bet you really want to place?” ; “What’s gambling really costing you?” and “What are you prepared to lose today? Set a deposit limit”.

Popular online wagering services Bet 365, Sportsbet, Ladbrokes, Neds and Pointsbet are among those required to apply the new taglines.