FURIOUS locals have blasted a cycle lane as a "waste of money" after it was built with a "ridiculous" design flaw.

Drivers were stunned when they spotted snaps of the new lane that made it impossible to use in Halifax, West Yorkshire. 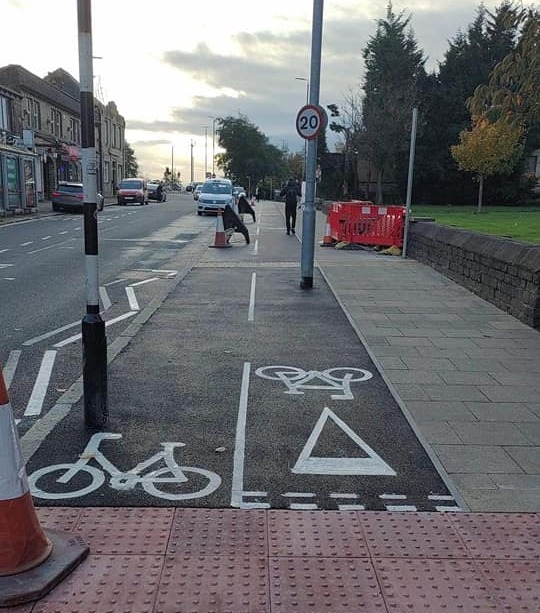 One baffled local told The Sun that the lane had actually narrowed the already congested road, leading to even more traffic jams.

He said: “The council took a fair bit of time to design and build the lane.

Others took to social media after the lane, built by Calderdale Council, opened to express their bemusement.

One said: “Not once have I seen a bike on King Cross Road.”

Another said: “Looking forward to parking over that while I grab my chicken and chips.”

One local said: “Oh my days… how blooming ridiculous and what a waste of money!

"Would have been better spent repairing the potholes that are ever increasing. Madness.”

Some residents were able to look on the bright side. One said: “On a positive note, it’s the only tarmac surface in Calderdale which hasn’t got any pot holes.”

The council has subsequently put up an orange barrier across the cycle lane, apparently intended to stop pedestrians from mistaking it for the pavement.

Boy, 15, seen shaking before being tortured to death by mum & her partner

Even some members of Calderdale Council were left scratching their heads.

Paul Bellenger of the Lib Dems said: “Even as a councillor for Calderdale I shake my head at this and wonder whose idea it was and what their thought process was.”

“The mind boggles sometimes at things that get passed within the authority that even we don't hear about until times like this.”

A spokesperson for the council said: “Unfortunately, errors and omissions on the design drawings which should have been corrected during construction mean that there is currently a lamp column located in the cycle lane and the lane itself is marked up to the adjacent zebra crossing.

"We are currently working with our contractors to relocate the lamp column and remove the incorrect cycle lane markings."