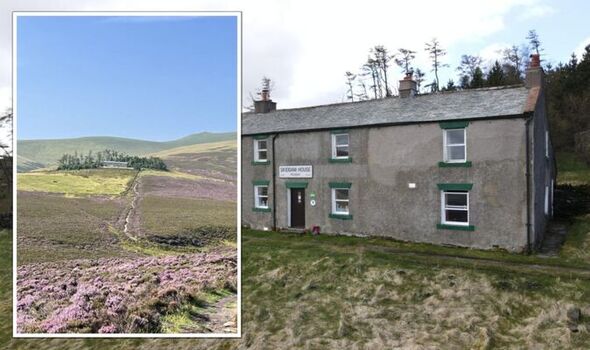 Skiddaw House, also described as Britain’s “loneliest” house, is located in the mountains near Keswick in Cumbria. At more than 1,500 feet, it is inaccessible by car and the shortest walking route, to the village of Threlkeld, takes around an hour and 20 minutes. Skiddaw House includes three mountains and 3,000 acres of land sprawled across the beautiful Lake District.

Meanwhile, the nearest pub in Bassenthwaite village is nearly four miles away and the nearest shop, in Keswick, is five miles away.

The enormous property boasts six bedrooms and five bathrooms and says that it comes with a “garden” – a modest description for its impressive surrounding land.

However, the north-facing house has no mains electricity, gas, telephone or neighbours. There is no heating or internet and water is sourced straight from the mountain.

The plot is one of the largest areas of the Lake District national park ever to be sold, according to Andrew Wright, head of Mitchell’s Land Agency which is organising the sale.

The property first went on the market in 2021 but, despite being one of Rightmove’s most viewed properties, the lack of heating and internet, isolated location and inaccessibility meant it failed to sell.

Now it is on sale once more – this time alongside 3,000 acres of stunning land, including Skiddaw Forest, Skiddaw Mountain and Great and Little Calva.

It will go under the hammer this week, described by auctioneers as the “most remote home in England”.

No price tag is given but it is thought to be on sale for about £10million, according to The Guardian.

Auctioneers will begin a sealed bidding process on Wednesday. All those bidding will simultaneously submit their bids to the auctioneer, meaning that nobody knows how much anyone else is offering.

Andrew Wright, head of Mitchell’s Land Agency, which is organising the sale, said: “It is one of the largest areas of the Lake District national park ever to be sold.”

It offers beautiful views of Lake District fells – with no dwelling or structure in sight other than an ancient dry stone wall.

Shooting and sporting rights are included in the sale. The listing says it has historically been a “successful grouse shoot” across the land.

Even at the height of the holiday season, when hikers and tourists flock to the lakes, the property is so far off the beaten path that it stays isolated.

Most of the Lake District is owned by big estates or by the National Trust – so an opportunity for such an enormous area of privately-owned land is a rare one.

During the shooting season, the Earl himself and his party would stay at this property.

After his death the cottages fell into disrepair. It was used for occasional school camping trips but was derelict by the 1980s.

Since 2007 it has been a hostel with the Youth Hostel Association (YHA). Before the pandemic, around 2,500 people a year would spend a night there.

The house was also used as a murder scene setting in Hugh Walpole’s 1932 novel “The Fortress”. He wrote: “It is one of the loneliest dwelling-places in all the British Isles, the only building from Threlkeld to Dash”.

The Lake District sees 15.8 million tourists visit every year, according to the National Park’s website – so Skiddaw House provides a one-in-a-lifetime opportunity to escape the crowds to enjoy the scenery.