The Federal Reserve reinforced its inflation fight by raising its key interest rate for the seventh time this year and signalling more hikes to come. But the Fed announced a smaller hike than it had in its past four meetings at a time when inflation is showing signs of easing.

The Fed boosted its benchmark rate a half-point to a range of 4.25 per cent to 4.5 per cent, its highest level in 15 years. Though smaller than its previous three-quarter-point hikes, the latest move will further heighten the costs of many consumer and business loans and the risk of a recession. 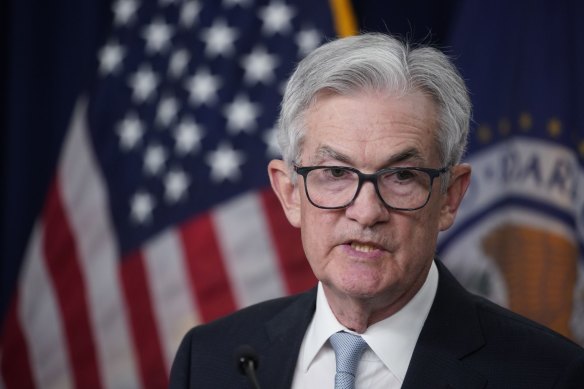 Fed chief Jerome Powell will speak at 6.30am AEDT.Credit:Bloomberg

The policymakers also forecast that their key short-term rate will reach a range of 5 per cent to 5.25 per cent by the end of 2023. That suggests that the Fed is prepared to raise its benchmark rate by an additional three-quarters of a point and leave it there until the end of next year. Some economists had expected that they would project only an additional half-point increase.

The S&P 500 erased a gain of more than 0.5 per cent after the announcement. Stocks had rallied more than 6 per cent since the last rate decision on the expectation that the central bank would be able to slow and possibly stop its tightening next year. That view took a hit with officials’ latest projections that the Fed funds rate will top 5 per cent in 2023, before being cut to 4.1 per cent in 2024.

The central bank’s latest rate hike was announced one day after an encouraging report showed that inflation in the United States slowed in November for a fifth straight month. The year-over-year increase of 7.1 per cent, though still high, was sharply below a recent peak of 9.1 per cent in June.

Fed officials have indicated that they see some evidence of progress in their drive to defeat the worst inflation bout in four decades and to bring inflation back down to their 2 per cent annual target. The national average for a gallon of regular fuel, for example, has tumbled from $US5 in June to $US3.21.