Nearly two-thirds of the returns that individuals filed were for income of Rs 5 lakh or less, according to a Business Standard analysis of the latest available tax data.

This comes amid reported discussions about raising the minimum threshold at which income tax is paid.

A total of 63.3 per cent of the total income tax returns that individuals filed were for an amount equal to or less than Rs 5 lakh, showed an analysis of the income tax data for the latest available assessment year of 2018-2019.

An income tax return (ITR) is a form that entities submit to the government with details about their income, and taxes paid or owed.

Another 26.7 per cent of individual returns were for amounts more than Rs 5 lakh and up to Rs 10 lakh.

Only 10 per cent of the income tax returns filed were for an amount greater than Rs 10 lakh (chart 1).

The assessment year broadly corresponds to the year after the income is earned.

Those earning over Rs 10 lakh accounted for the largest share at 38.1 per cent.

Those earning between Rs 5 lakh-Rs 10 lakh accounted for 29.4 per cent.

Those at or below the threshold of Rs 5 lakh accounted for 32.6 per cent of the total amount.

Salary was the largest source of income for individuals at Rs 20 trillion.

This was followed by business income at Rs 9.3 trillion.

Individuals accounted for the bulk of all the income that tax filers declared.

They accounted for Rs 34 trillion of the Rs 51 trillion in gross total income declared for assessment year 2018-2019.

In other words, they accounted for nearly Rs 7 out of every Rs 10 declared to the government as gross total income.

Their share in the total number of returns filed has also been rising with time.

The data about returns filed is in terms of financial years.

The number of returns filed had hit a high of 72.6 million in assessment year 2019-20, which broadly covers income for FY19.

This included only non-audited returns, according to a statement from the income tax department. 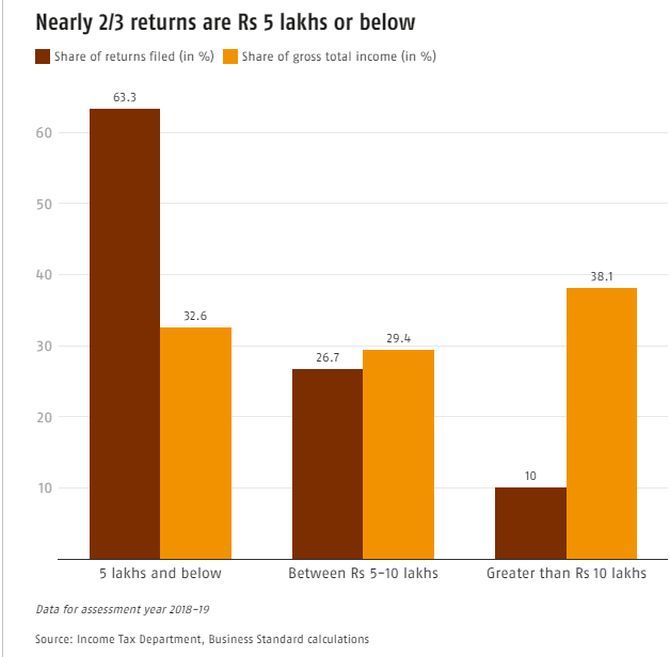 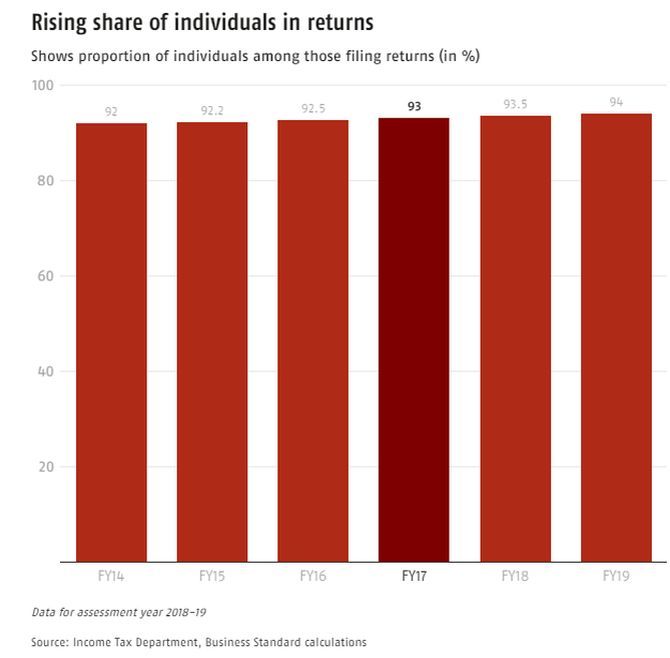