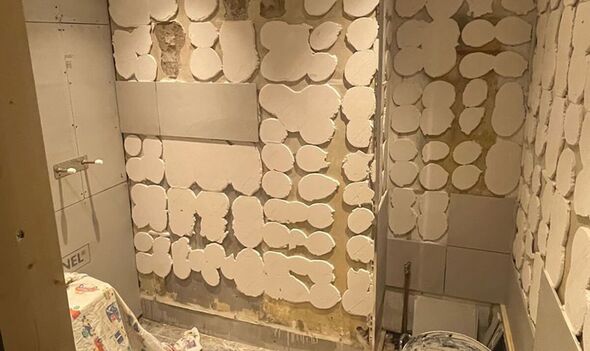 A first-time homeowner hired a private detective to track down a bathroom fitter who disappeared with more than £3,000.

Paul Howson, 36, said he paid the tradesman to do a “two-week job” on his bathroom which is still incomplete eight months later.

Paul moved back in with his parents to save enough money to buy his first home and finally secured a deal on a property in Mossley Hill, Liverpool, in August 2021.

When he instructed the bathroom fitter, who was recommended by a family friend, to complete work on the property, Paul was told it would take just a fortnight but “the excuses started” after he handed over thousands of pounds for materials and labour, paying £3,190 in instalments.

Speaking to Liverpool Echo, Paul said: “I had a really good feeling – he was an ordinary guy, polite and patient.

“It’s a 40-minute drive with no traffic and I have a stressful job so I hadn’t really been going to the house.”

And, in the following two months, little work had been done. Tiles which had been laid had fallen off the wall and smashed, denting the brand-new shower tray that had been fitted.

Paul said: “You could literally pull the tiles off the wall with minimal force.”

After Paul raised concerns, the bathroom fitter gave a September completion date, which was then moved back to October. Communication eventually broke down in November.

The situation has had wider repercussions – Paul hoped to lock in at a lower rate of mortgage before prices spiralled in autumn, but due to him having no bathroom he couldn’t secure a lender. Many mortgage lenders class a home without the likes of bathrooms or kitchens as “uninhabitable”.

Elsewhere, he has had to spend hundreds of pounds on a new shower tray and replacement tiles, bringing the total amount spent to £3,521.92.

In an attempt to get his money back, Paul even went as far as hiring a private detective to find the fitter’s address after communication halted and has also been in contact with a solicitor.

Paul has not spent one night in the house he completed on almost 18 months ago. Paul told the ECHO the experience has left him “sick with stress”.

He added: “I’ve just had enough of this. It’s supposed to be an exciting and happy time. I’m at the point where I want to sell up.

“Everyone says a good tradesman comes recommended. People had tagged him on social media and his work looked good.”

In future, Paul said he would be more cautious. He added: “He’s not a member of a professional body. In future, I’d get a quote, get it in writing, get a fixed address and preferably a landline number.

“I really had a good feeling about him and thought I had a really good person who cares about their job and reputation.”