The turmoil, if you read the headlines, is about the so-called funding winter.
Deep down, though, the question is one of the common direction in which founders and investors need to pull, points out Suveen Sinha. 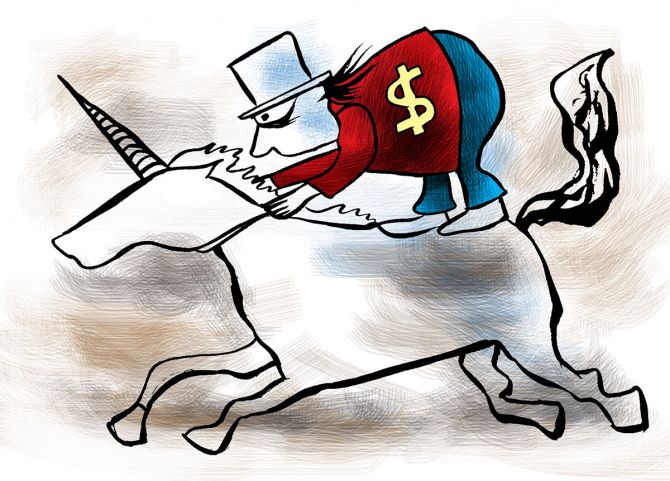 When online grocery delivery outfits first started in India, they intended to solve a problem, one of access, by bringing the producers and consumers closer in the — ahem! — food chain.

The International Finance Corporation, a multilateral development finance institution, where I used to work, thought it fit to invest in BigBasket.

IFC’s investment officers, during the several review meetings, talked about the strong ‘development angle’ of eliminating half a dozen intermediaries to increase remuneration for producers and reduce prices for consumers. That created value.

These days, online grocery delivery is about shaving minutes off the delivery time. That creates valuation.

That difference — between value and valuation — forms a chasm between a founder and an investor.

It leads to frequent flashpoints and is seen as a reason behind the current turmoil in the start-up world.

This turmoil, if you read the headlines, is about the so-called funding winter.

Deep down, though, the question is one of the common direction in which founders and investors need to pull.

In the conference rooms of start-ups, it is not unusual to hear conversations such as this:

Founder: “You have invested in dozens of companies; for me, this is the only thing.”

Investor: “Listen, we bring the money, we take the risks.”

Founder: “This start-up is my life. I care more about it than you ever would.”

Investor: “Please do not preach to me.”

Founders think they work round the clock — some really do — while investors get rich for free.

Investors believe they must keep up the pressure, else the founders would go in esoteric tangents.

Founders want to see what is possible, investors worry over what exits may be possible.

As a founder-turned-angel investor told me: “The founder looks for customers in new markets that may not exist at the moment. For the venture capitalists, the customer is the next VC who would buy into the company at a higher valuation.”

Byju Raveendran, the founder and CEO of Byju’s, India’s most valued start-up, told us in an interview in September: “Investors think long term, but I have never heard [them speak of] more than five or 10 years. For us, the long term is generational.”

To be fair to investors, they bet on people who may not have a proven track record and often make investments based on sparse information, knowing nine out of 10 bets might not come off.

Unfortunately, in recent times, amid the noise about creation of unicorns, funding and valuation have become the benchmarks of success not only for a company and its founders but also for the entire ecosystem.

Union Minister Piyush Goyal said at the end of October the valuation of India’s start-up system stood at $368 billion, and went on to count more than 110 unicorns in the country and 75 soonicorns, the latter meaning soon-to-be unicorns.

This approach of judging the success of start-ups by their funding or valuation needs a reality check.

Otherwise, along with unicorns and soonicorns, we will be counting zombie unicorns: Companies that become unicorns but have no business models and are irrelevant.

Most true entrepreneurs, founders of transformational companies, set out to solve a problem that drives them to distraction.

At an event organised by Business Standard in Mumbai last month, Vijay Shekhar Sharma of Paytm talked about how he obsessed over solving the problem of payment for that little shop at the very bottom of the food chain in the farthest town.

It did not deter him that the owner of that shop might not want it.

Kunal Bahl wanted his Snapdeal to bridge the gap between the long tail of supply and the very long tail of demand in India’s retail sector.

ShopClues founders wanted to be an online version of Karol Bagh, the West Delhi market symbolising the small-trader community.

Shashank ND of Practo wanted to solve the tricky problem, one we all face at some point, of the doctor-patient relationship, including appointments and health records.

Not all of them are wildly successful today, but they blazed new trails.

Looking back, many fabled companies that now appear to be sure-fire winners were risky bets when they were start-ups.

But they did find backers, be it computer software and hardware companies in the 1970s, biotechnology ventures in the 1980s, or Internet-related bets in the 1990s.

Of late, though, venture capital appears to have become less adventurous.

That is understandable. Venture capitalists are not out to change the world; they want to make money, which is their job.

They can get swayed by an entrepreneur’s desperate desire to change the status quo.

But they also have to answer to their limited partners, the entities that give money to VCs for investing.

That said, some VCs may be taking their jobs too seriously.

They appear to be more interested in small, incremental gains: Small features, widgets, or quickening the pace of grocery delivery by a minute.

The focus today is no longer on solving a problem or creating transformational impact.

It is on conserving cash, having enough to last 12 to 18 months, and a path to profitability.

Dhiraj Rajaram of Mu Sigma once told me there are two kinds of entrepreneurs.

The “love marriage entrepreneur” falls in love with an idea and just has to do it.

The “arranged marriage” one decides to be an entrepreneur and then looks for what to do and how to raise funds.

One can be about value, the other about valuation, even in the marriage market.

In either case, the founder-investor match is not exactly made in heaven.