Australian businesses may have been hoping to cash in on the reopening of China’s economy after months of COVID-19 lockdowns. But after the world’s second-largest economy this week reported dismal growth figures, things are looking grim – unless you pump out gas or oil.

China’s annual gross domestic product growth slumped to one of the worst results in 50 years, falling from 8 per cent in 2021 to 3 per cent last year, figures this week showed. While some have questioned the integrity of the data, Treasurer Jim Chalmers warned that China’s slowdown could pose “one of the major economic challenges facing Australia at the start of 2023”.

But UBS China economist Ning Zhang is confident there is “almost zero” chance China will slide into recession this year and demand for some energy resources could even rebound.

When the world’s second-biggest economy reversed its COVID restrictions late last year, there were concerns that infections could rip through the Chinese population and cause activity there to slow. 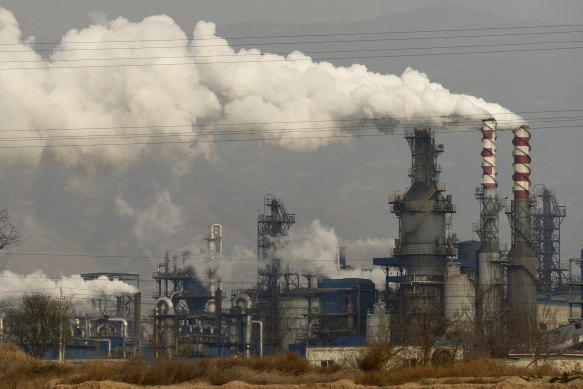 While the reopening has disrupted mobility in China, search engine data suggests that the peak in infections has passed, according to UBS global economist Arend Kapteyn.

“China stopped providing COVID data on December 25, but looking at how many people are searching for COVID symptoms on Baidu suggests the peak in daily case numbers was somewhere around the third week of December,” Kapteyn says.

“Gas prices are back around pre-invasion levels and gas stores have been much fuller than in the past years, but we can’t ramp up supply very quickly, so there’s worry of an LNG shortage as China adds upward pressure to gas prices at the margin. China’s reopening is a good thing for Australia because you’re in a much better position as a resource producer than somewhere like Europe.”

But it’s coal that’s likely to see the biggest rebound, according to Zhang.

“The Chinese government won’t allow for a big, sharp spike in coal consumption, but their decarbonisation rhetoric is turning less hawkish, and they’re encouraging the use of clean coal,” he says.

“More than two thirds of China’s energy consumption comes from coal, so the overall energy structure is highly dependent on it, especially for heating. During winter in the fourth quarter this year, the incremental increase in demand within a very short period of two to three months will be quite dramatic.”

China has recently lifted several unofficial restrictions on Australian coal imports as part of a thawing of diplomatic relations between the two countries. This month, China’s setate planner allowed three government backed utilities and its largest steelmaker to resume imports with Australia.

Zhang says there’s almost no chance of China entering a recession this year despite negative growth outlooks for several regions across the world.

“The likelihood of recession in China is almost zero,” he says. “There’s still some lingering headwinds from the big COVID wave starting in December, but we believe growth in China will be around 5 per cent this year. China was first in, first out of the first COVID shock with very little problem in terms of production and capacity.”

Meanwhile, Kapteyn forecasts a mild recession spanning from the second to fourth quarter in the US, and from the fourth quarter last year to first quarter this year for Europe.

“The recession will be mild in that there’ll be a roughly one percentage point decline in the level of GDP from peak to trough in these areas,” he said. “It would mean a minus 2 or 3 per cent growth rate, along with an unemployment rate of 3 to 5 per cent, before recovery.”

Zhang says the bulk of economic growth in China will come from consumption starting around the second quarter – most of which will be on domestic goods.

“Growth this year could be boosted by a consumption rebound on the back of excess savings, less so by investment, which tends to be more correlated with Australia. There will be some travelling and overseas spending on education and luxury goods later in the year, but it will mainly be domestic consumption this year.”

Meanwhile, a slowdown in Chinese investment and infrastructure means there’s unlikely to be significant upside in demand for Australia’s top export.

“In terms of iron ore, we believe overall demand is not that sexy,” Zhang says. “The private sector’s demand, at best, will stay flattish, and infrastructure growth is slowing. Adding them together, iron ore demand should be slightly better than last year, but won’t be like previous supercycles of rebound in 2009 and 2016. Iron ore prices should largely stabilise at around the current value of $120.”

Kapteyn says overall imports into China will improve, but not lift substantially.

“Our import volume assumption for China in 2022 was running at about minus three, and this year, we think it’s maybe plus one,” he says. “So you get a four percentage point volume improvement in imports which isn’t a huge change.”

Overall, China’s reopening signals a return to business as usual, and some upside for Australia’s energy exporters, but Kapteyn says the benefits internationally are less clear as energy prices rise.

“China’s just going back to normal,” he says. “Its opening up is beneficial to China, not necessarily for the rest of the world.”