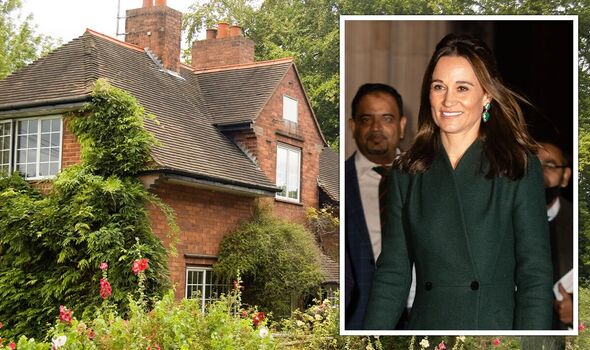 Pippa Middleton decided to relocate to Berkshire last year where she and her husband James Matthews bought an impressive £15million mansion very near where she grew up with her sister the Princess of Wales. Their new home, which is one of the most expensive properties in the area, is about a 20-minute drive from Pippa’s parents, Michael and Carole Middleton’s current home in Bucklebury.

The house is very close to where Pippa, Kate, and their brother James Middleton grew up, in Chapel Row village, a tiny town in Bucklebury, West Berkshire, where the estimated population is 627, according to figures from 2019.

The property is believed to have 30 rooms, a huge outdoor space and a garden for their three children to play, and it is likely to include an outdoor or indoor pool and a gym, as Pippa is a keen runner and loves to exercise.

It is reported that the house also has an underground cinema, a nursery, air conditioning and possibly a lift and room for staff.

The 150 acres of grounds lead down to a river and there is also a beautiful walled garden and a greenhouse.

Before moving to the countryside with their three children to presumably enjoy a more tranquil life away from the hustle and bustle of the big city, Pippa and James lived in the exclusive neighbourhood of Chelsea, in London.

James, who is a former professional racing driver and now works as a hedge fund, bought the stunning Chelsea home for £17million in 2015.

A friend of the couple said: “Pippa and her family are thrilled. It’s a very exciting time in their lives. They are looking forward to living closer to her parents,” they told the Daily Mail.

A local resident said about their new home in Berkshire: “It’s a far more impressive property than any of those on the Windsor estate, apart from the castle.”

According to property site Rightmove, houses in Berkshire had an overall average price of £531,100 over the last year.

But how is life in Berkshire?

The beautiful county is the perfect option for those who want to relocate to a quiet area away from the city to have some peace and tranquillity.

Berkshire is just one hour and a half away from London, meaning that weekends and nights in the city can still be enjoyed while living in the idyllic countryside.

It is also a great place to live with children, as there are many outstanding schools in the area, and they will be able to spend more time outside.

A recent study by Travel and lifestyle blog Muddy Stillettos revealed the top 200 best places to live and the winner in Berkshire was the town of Newbury.

Spare: by Prince Harry, The Duke of Sussex

Prince Harry’s highly anticipated and revealing memoir, Spare, launches on January 10, 2023. Available to pre-order now on Amazon, shop to read the gripping story of his life growing up in the royal household.

The site described Berkshire as a “fancy” and “commutable” county and explained that Newbury, Windsor, Wokingham and Pangbourne are some of the most beautiful towns to live in.

Newbury, where the average house price sits at around £394,731 is “home to the Queen’s favourite racecourse and Downton Abbey, and it is one of the happiest places to live in the UK,” Muddly Stilettos said.

“But it’s so much more. There’s a cool cultural and foodie scene, a gaggle of indie businesses and stonking road and rail links,” they said.

Pippa’s home is very near Bucklebury Farm Park, where her parents reside, meaning that she lives very close to Pangbourne and Streatley, some of the most picturesque little towns in Berkshire.